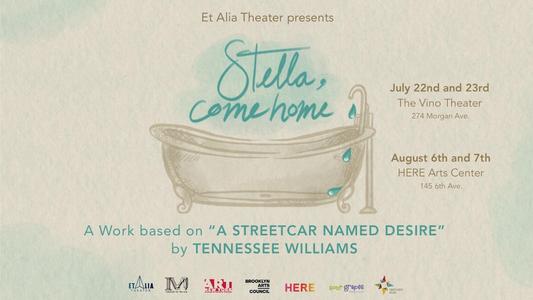 Part of the 2022 So Many Shakespeares Festival

Stella, Come Home is a dance-theater piece that translates the iconic
American play A Streetcar Named Desire into movement and dance through the bodies
of Et Alia Theater Company's international women. We feel urged to explore what it
means to perform this pinnacle of US theater as immigrant women in New York City,
one of the most heterogeneous cities in the world. Just as a reality-stricken Blanche
longs for a return to her imagined Belle Reve, we are outsiders going through the
painful struggle of letting go of our past, while the promised land of NYC forces us to
face our truth: culturally diverse women still have to fight to claim their space.

​Stella, Come Home fits in with the theme of the Shakespeare festival, because the concept of the project is all about reimagining classic/well-known texts in new contexts. What does it mean to put up plays by William Shakespeare or Tennessee Williams in 2022? These masterpieces that have been done and redone thousands of times need constant recontextualization if they are to continue to be relevant in today’s world. What we are trying to do through Stella, Come Home is bring A Streetcar Named Desire closer to the immigrant community, a community that has been left out from many conversations, but that has so much to gain from seeing itself represented on stage, in such an iconic American play. While Shakespeare is not an American classic, his plays are a pinnacle of worldwide theater that have been and should continue to be informed by immigrant artists.
​
THE CAST:
Ana Moioli

All performances that are part of the So Many Shakespeares Festival will be at The Vino Theater, 274 Morgan Ave, 11211