​
DANIKA ST DENIS (VERONICA NOVAK)
Originally from Canada, Danika studied acting and devised theatre at York University. She then moved to New York City where she studied musical theatre at The American Musical and Dramatic Academy. Following graduation, she has worked with multiple theater companies here in New York such as The Other Side of Silence (TOSOS) Theater Co., AlphaNYC, or The Players Theatre. She has also travelled to perform in different states such as Charlotte, NC or Kansas City, MO as a singer/dancer with RWS casting company. In addition to performing, she is a certified group fitness instructor and huge fitness enthusiast!

DASH BAKER (MICHAEL NOVAK)
Dash hails from Pottery Addition, Ohio.  He graduated from the American Musical and Dramatic Academy and has been performing professionally for 3 years.  He and Jo Ptacek founded the Sophomoric Society in the midst of the pandemic in 2020.  He is beyond excited to put on the group’s first show and is proud of each member’s hard work and craftsmanship.

KEELEY SHANTZ (ANNETTE RALEIGH)
Raised in the Midwest, Keeley grew up dancing and acting on the stage. After getting her first professional gig in Mamma Mia! at the Des Moines Playhouse, she was recruited to the American Musical and Dramatic Academy in New York City. She graduated in May of 2019 and has been working professionally ever since. She has been in numerous indie films, web series, music videos, voiceovers, and made her NYC theater debut at the Broadway Comedy Club. Keeley has also been nominated twice for Best Actress in her short films.

MATTHEW WYGONSKI (ALAN RALEIGH)
Originally from the suburbs of Chicago and then southern Florida, where his love for music, acting, and storytelling grew. He has moved to New York City to further advance his skills in each of these areas, and cultivate lasting relationships with the diverse and fascinating people herein.

JOSEPHINE PTACEK (Stage Manager)
Native to Nebraska, Josephine Ptacek moved to New York to pursue her passions as an artist. After her graduation from The American Musical and Dramatic Academy in early 2018, she was given the opportunity to perform in The American Theater of Actors’ (ATA) Shakespeare in Concert, as well as, play Nina in Chekhov’s The Seagull (also at ATA) in 2019. This year, with Dash, Josephine cofounded the acting ensemble “Sophomoric Society” and is excited to be directing and acting in one of its first projects: Kenneth Lonergan’s This Is Our Youth which streams later this month via zoom. She is so excited to be helping stage manage for Sophomoric’s very first project: God Of Carnage. She thanks the cast and director for their hard work, and Sour Grapes Productions for allowing the use of their wonderful space. Special thanks to Genny for being at every rehearsal and helping with sound and lights! For more information on Sophomoric’s upcoming show, visit her website: www.josephineptacek.com.

BILLY GILLEN (Director)
Billy is thrilled to be making his directing debut with The Sophomoric Society! He originally hails from Glastonbury, CT. He is a graduate of the American Musical and Dramatic Academy, Powerhouse Theater Training Program, and recently, the National Theater Institute at the Eugene O'Neill Theater Center. Catch Billy, along with Josephine Ptacek and Dash Baker, acting in the second Sophomoric Society production on April 24th where he'll play the role of Warren Straub in Kenneth Lonergan's "THIS IS OUR YOUTH" (directed and co-starred by Josephine herself!) Recent acting credits include: Richard III, The Seagull, The Last Caddoan (All at the American Theater of Actors), Hamlet (Producers Club), Cymbeline (Powerhouse) and Equus (Oddfellows Playhouse). Billy wants to thank his rockin' cast, Jo, and family. A HUGE thank you goes out to Genny Yosco for going above and beyond; we wouldn't have the show without you! www.billygillen.com, Instagram: @jtgillen27, Twitter : @Billy0494 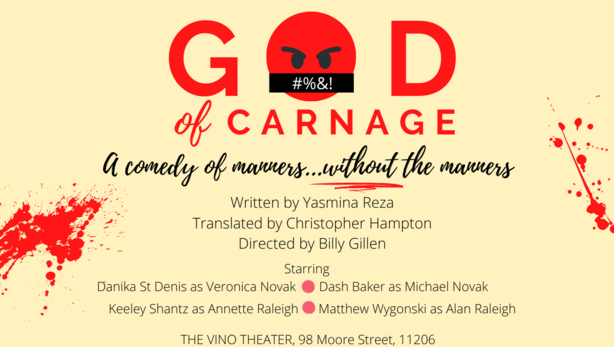 A playground altercation between eleven-year-old boys brings together two sets of Brooklyn parents for a meeting to resolve the matter. At first, diplomatic niceties are observed, but as the meeting progresses, and the rum flows, tensions emerge and the gloves come off, leaving the couples with more than just their liberal principles in tatters.